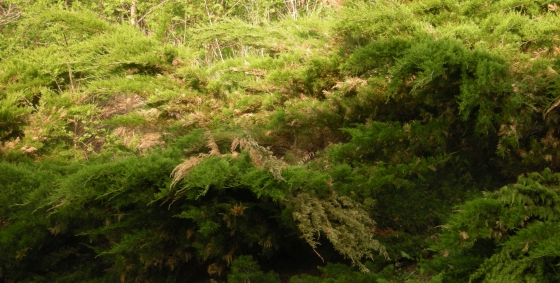 Here it is well into July and we’re still dealing with winter dieback. This year, it has been the worst I’ve ever seen. Usually, we get calls for small evergreens that weren’t protected with an anti-desiccant and have some brown needles. This year, we’re seeing whole trees and shrubs that turned brown.

Taxus (yews) are usually indestructible, yet, we’ve received several calls from customers who have lost mature Taxus to winter dieback. One customer has a row of junipers about midway up the hill in back of the house. They’ve been growing fine for 12 years, but this spring, he noticed dieback, mostly from the bottom. There were also a few top branches that died. One branch began turning brown in May.

At a social event, I was asked why a large blue spruce was losing its blue color on the bottom branches while the upper branches were just fine. Checking the tree when leaving the event, I noticed that these branches had not just lost their blue color, they were turning brown.

Many hydrangeas leafed out beautifully at the bottom, but the tops were dead. The dead tissue began right about at the snow line. That’s because the bottom branches were protected while the branches that protruded above the snow weren’t protected. so they were unable to survive the bitter cold.

Pruning out the dead wood is the only remedy. If you prune shrubs yourself, remember to not leave stubs. Prune branches all the way back to a junction with live wood. Don’t be afraid to prune out extra wood if it will help the shrub to look more natural. This can be dirty, scratchy, unpleasant work, so you can call us to do it for you.

If you have trees that are winter burned, don’t even think about pruning them yourself. It’s too dangerous. Call our trained, insured, equipped arborists to do the job professionally and safely.

As for lawn damage, we haven’t seen as much fungal disease as we do in most spring seasons. I think that’s because we had below freezing temperatures and snow cover most of the winter, and this protected the turfgrass.