Even though we’re past the mid-point in September, there’s still time to protect your valuable ash trees. Our battle against the emerald ash borer (EAB) doesn’t stop just because we’ve passed the unofficial end of summer. Although trees can be treated until the ground freezes, it’s best if you have them taken care of as soon as possible. 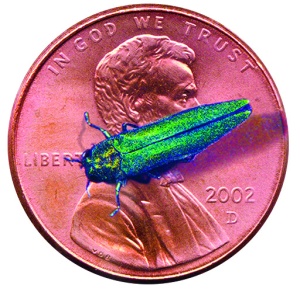 EAB control is systemic, which means it’s injected directly into the tree’s vascular system. That’s because these insidious insects live most of their lives inside the tree, where they disrupt the phloem – the vessels that distribute food throughout the tree. Trees continue to take up water until the ground freezes but they stop making food when the leaves start turning color. Since we don’t know when that will happen, it’s best to have them treated early rather than wait until the last minute.

If your ash trees are starting to turn color or have already begun dropping their leaves, they should be inspected by one of our arborists. You may already have EAB. If between 50 and 70 percent of the leaves are still green, it may be worth treating them. If less than 50 percent are green, its chance of survival is quite slim.

If your ash trees look green and healthy, don’t pat yourself on the back for having dodged a bullet. Any untreated tree is fair game for EAB. That’s why it’s important to have a preventive treatment applied.

EAB treatment isn’t a DIY task. The formulations labeled for consumer application just aren’t potent enough to knock out this strong, invasive insect. The formulations for licensed pesticide applicators are much stronger. Plus, it takes finesse and experience to know exactly where to inject it into a tree.

The material we use needs to be applied every two years as a preventive and every year as a treatment for trees already hosting EAB.

Ash trees are beautiful, stately specimens. They are also commercially valuable for products like baseball bats. It would be a shame if these trees go the way of the chestnut and American elm. Prevention and treatment are investments in both the present and the future. The cost of removing and replacing a dead ash tree could pay for many years of treatment.

← Keep Mowing Until Grass Goes Dormant
Stock Up On Firewood, Not Insects →

One comment on “Still Time To Protect Your Ash Tree(s)”