June and July are the best months in which to prune evergreens. That’s when new growth forms. However, like everything in nature, there are no absolutes, no definitive dates to start pruning. 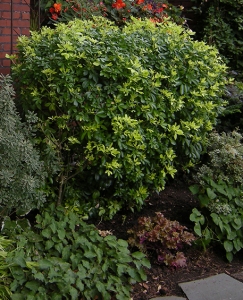 Pruning is easiest when the new growth is finished elongating but before the color turns. Waiting for the new growth to elongate means you won’t have to prune a second time, as you may with early pruning. Pruning before the new growth completely darkens in color will ease the amount of effort you’ll have to exert to make each cut.

Before you begin pruning, run your fingers over the light green needles and bend the branch. The needles should be nice and soft and the wood soft and pliable. Then check out the mature part of a branch. See how stiff and sharp the needles are and how firm the wood is? Which is the most tiring to cut?

As with deciduous trees and shrubs, evergreens also should be pruned to meet pre-identified objectives. Do you want to:

The objectives listed above are the same as those for deciduous plants. Use the same approach to pruning evergreen trees as deciduous trees. Turn the job over to our professional arborists. Conifers (cone bearers) can be even more dangerous than deciduous trees for the untrained climber. Their needles are sharper than leaves and their branches are more flexible than a deciduous tree. They also ooze a lot of sap, messing up clothes, skin and tools. The sharp needles can make reaching for the junction of a branch with the trunk very scratchy.

Shrubs, on the other hand, are less dangerous but you need to take some of the same precautions as trees. I recommend wearing long sleeves and long pants if you have to reach into the sharp foliage to remove a branch. Be careful removing whole branches so you don’t scratch yourself when removing them. Be careful when removing front facing branches that you don’t leave a hole in the foliage. Needles don’t go all the way in to the main stem(s). Don’t leave branch stubs. On the plus side, shrub branch diameters tend to be smaller than tree branches so you can often use loppers and just reach in there and cut.

Don’t forget that our professional arborists can prune shrubs as well as trees, so you can turn the whole job over to them and not worry about whether you’re doing the job safely or correctly.

One comment on “Check New Growth Before Pruning Evergreens”