After a summer absence, grubs are beginning to feast on the grass roots of our lawns again. But these aren’t the same grubs that dined on your lawn this spring. It’s their children. 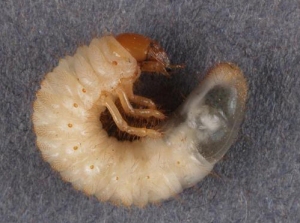 After their spring feast, the grubs pupated, similar to what happens when caterpillars become moths or butterflies. They emerged from the pupa stage as adults in late May and early June, and began flying around looking to mate. You may have seen them. They were big, brown, beetle-like insects, commonly known as June bugs, that may have flown into your windows and patio doors.

After mating, the female lays her eggs on the turf. When the grubs hatch, they burrow into the soil and begin eating the grass roots. To check if you have grubs, you can cut 12 inch squares of sod from several locations. Fold it back and see if there are any grubs. They are small, white and crescent shaped.

Count the grubs in each test plot. If there are six or fewer, they won’t do enough damage to warrant treatment. If there are more than six, treatment should be considered. Late summer and early fall are the best times to treat for grubs. They are small and weak, and treatment will be more effective. As they gorge themselves with food – your grass roots – they grow bigger and bigger. They will then burrow deeper into the soil to overwinter where it’s warm.

When the grubs come back up to the grass root zone in spring to begin feasting again, they will be double or triple the size they were in the fall, and much stronger. They will be better able to resist the control material in the spring.

If you don’t want to cut and roll back the sod samples or spread the grub treatment, we have lawn care professionals who will handle the whole task for you.